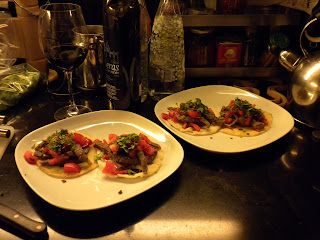 This is a good everything dish that more or less works with whatever vegetables you have on hand. I used red peppers and tomatoes, but zucchini, mushrooms, asparagus, yellow squash, fennel, carrots would all work, in addition to a number of other veggies. Really the most important things needed to turn your "fajitas" into "fajitas" and make them acceptable cargo for a couple of corn tortillas is lime and cilantro - although cumin and any chili peppers (cayenne, chipotle, Korean chili, jalapeño, Turkish smoked something that we were given as a gift, serrano) really add to the dish, and are good things to have on hand at all times anyway - dried, while they may lose some of their kick, they really last forever.
Squeeze the juice from a couple of limes into a bowl with a dollop of olive oil, couple of shakes of cumin, crushed clove or two of garlic, four finger pinch of chunky rock salt and a dash of the chili of your choice. Take your two relatively thin steaks and throw them in the mixture, either whole or already sliced into thin strips (it will marinate faster already cut if you are in a hurry). Let marinate for anywhere from 10 minutes to 1 hour, depending on your rush. And if you have to go out and accidentally leave the steak marinating for two hours while you have a glass of wine with a friend or go to Pilates, don´t worry. It will be fine.
When you´re ready to cook, chop whatever vegetables you will be using into thin slices or strips and heat up your grill pan (I live in a 60m city apartment, this is as close to a grill as I am going to get). Take the beef out of the marinade and dry it off. When the pan is good and hot, throw on the sliced beef for a minute or two and then take it off and throw on the veg. for another minute or two. Mix the whole lot together and divide between already heated (I grill them on a pan with a drop of oil for 30 seconds on each side) corn tortillas. Sprinkle with fresh cilantro, diced tomatoes and a little crumble of fresh cheese,if you like (feta works well with this dish). Serves two or more (depending on how much beef and veg you used) and really the most difficult part in making this dish is cleaning the grill pan later.