Restaurant La Passarelle, Marseille - and the best lettuce of my life 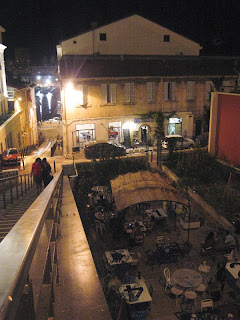 When walking through Marseille in late July wheeling suitcases and toting guide book laden shoulder bags in 90% humidity, it may seem that the city is larger and more labyrinthine then you imagined when first mapping out the location of your hotel at home that very morning. It also seems to be incredibly steep and hilly on some sides, that is, until a few days later when you repeat the same drill in Genova. Marseille is a large city, to be sure, but one that is so easily explored and magnificently arrayed around the old port and the more winding streets that rise up behind it, that its charms transform with every few steps unveiling a host of new surprises; the greatest of these being Restaurant "La Passarelle".
Sandwiched rather ingeniously between the Radisson Hotel and the Vieux Port, the first thing that is impossible not to notice (and be envious of) is the fact that there is a massive vegetable garden in the middle of the city center. Tucked next-to and under a long and modern staircase connecting two parallel streets of very different elevations, the garden seems sprawling, thriving, and completely and wonderfully utilitarian. It is easy to see the tomato plants, zucchinis, peas, dill, cucumbers, carrots, strawberry plants, etc. through the fence around this corner lot, as well as the thing that almost makes my heart stop, an elevated wooden terrace covered in tables - a restaurant!
This has always been my dream restaurant, a simple place with its own garden serving just a couple of dishes that change on a daily basis depending on what's in season. The menu is posted on the wall of the actual restaurant, located in a building just across the street. It is handwritten, with just three starters, three entrees and a couple of desserts. I start to get so excited that I begin calculating how many times we can eat here before we have to leave the city. I start planning our next trip to Marseille. Enrique reminds me that we havn't eaten here yet. We make a reservation for dinner that night on the terrace in the garden, although it is worth mentioning that the inside of the restaurant is very charming and inviting as well.
I tend to live in a world of food expectations. I have been known to ruin restaurants for myself just by virtue of the fact that I get so excited, my expectations so high; although I would also argue that I am not picky in the least. I don't demand a fancy setting or incredible service, or even "fancy" food, only good ingredients cooked well for a reasonable price (with regards to what you are getting).That being said, I can comfortably say that even if you were to take away the beautiful garden and candle-lit terrace that greeted us at La Passarelle when we arrived that evening, I would still remember this meal as one of the most delicious that I have ever had - although I can't even remember exactly what we ate. The first dish was a choice between an onion tart with thyme, a cold melon soup and a mixed salad plate, which is what we ordered. It was very simple. Baby carrots and green beans, a bit of hummus, maybe some kind of marinated eggplant and olives, hummus, and baby salad greens dressed with only sea salt, lemon juice a touch of oil. The lettuce was unbelievably good, as were the carrots and the beans, and everything else for that matter... I have been trying to replicate it at home ever since. The waitress told us that while the garden didn't produce enough vegetables to cover the needs of the restaurant, everything they use is from a local organic farmer, as is the meat, fish etc. Our entrees came as a slight surprise as one was a deliciously herbed pork (expected) and the other a seared lamb's liver with almonds (unexpected). In our excitement, hunger and not-perfect French, we had pieced together the foods on the menu (charmingly handwritten everyday in a agenda-like book which makes it fun to go back and look at what dishes were being served when), and had seen foie and agneau - oh, we love both foie and lamb - but had not realized that it was actually foie OF agneau. Disappointed for about 10 seconds when the plate arrived to the table, I don't usually like the texture or gamey flavor of meaty livers and neither does Enrique, we soon realized that it was as delicious as everything else on the table and once again exemplified what I have come to think of as French cooking - fresh ingredients, prepared perfectly in such a way as to accent and bring out their very best qualities. I am so jealous.
We finished with a dessert of nutty baked apricot and, after coming to the end of our Côtes de Provence rosé, were invited by the charming waitress to a locally made brandy.
The evening's soundtrack provided by a splashing fountain and the quiet murmurings of the other diners (strangely and wonderfully quiet compared to Spain). As we were savoring our brandies, the bartender from the nice looking bar down the street ran into the garden with a pair of scissors and proceeded to cut some more mint for his mojitos, bringing to life the heart-warming concept of a community garden and rounding off one of the most delightful and perfect meals that I have ever enjoyed. (by the way, Marseille is a wonderful city and a great place to visit)
3 comments