50 Shades of Chicken to Titillate the Culinary World 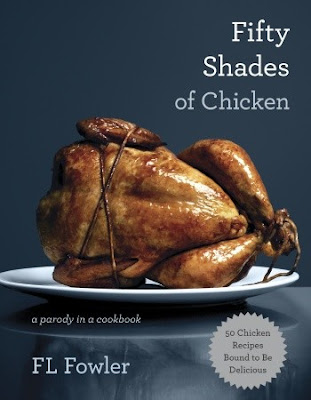 Every time over the years that I have stuffed my arm into the cavity of a turkey or chicken, or trussed its limbs together in an elaborate form of poultry bondage, I have felt a tenderness in my loins - which is to say my pork tenderloins - to see if they are done brining so I can put the chicken in.

Published by Clarkson Potter and ready for release this November, according to yesterday's rundown in the Huffington Post and today's review in People, this naughty cookbook features fifty recipes with filthy titles, my personal favorite being Chicken with a Lardon.

And to think I spent my whole summer coming up with a different parody entitled "Fifty Shades of .....".  I'll never tell.

Restaurante In Situ: in position to succeed. 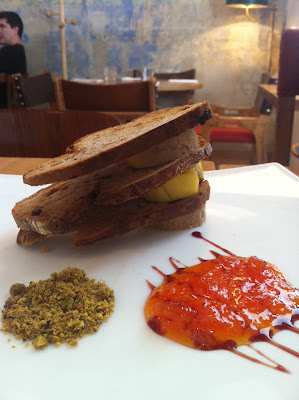 I feel like it's been a while since I've gotten excited about a restaurant.

I'm not talking about a specialty restaurant, one that costs half your paycheck but creates an experience of a lifetime: eating gambas rojas (red prawns) straight out of the sea on a beach in Denia, or dining under the Michelin starlight; but rather a cozy neighborhood eatery that falls under the triumvirate of Spanish restaurant classification: Bueno, Bonito, Barato (good, pretty, cheap).
In fact, both times that I dined at In Situ, I not only found that prophesy fulfilled, but perhaps even exceeded.

Located on Madrid's Calle Valverde, between Malasaña and Gran Vía, the local itself is welcoming, with high ceilings, mismatched wooden tables and chairs, and a Swedishy, simplicity of lines, funky lamps and calming tones. A highlight is the large mural wall in the front room, painted and drawn over in a way reminiscent of chipping frescoes in Venice where humidity has taken its toll on the paint and imposed its own charming, faded pattern. This sounds strange, I know, but it really is lovely (you can catch a glimpse of it in the background of this photo). I wish I had a wall like that in my house. Up the small staircase, there are two back rooms with more tables. It may be slightly gloomier during the day, when the sun is cheerfully streaming in the restaurant's front window, but it is very cozy and romantic at night.

The food is a mixture of recognizable, international bistro fare, but each dish is prepared with its own arrangement of flavors and ingredients that makes it remarkably surprising: risotto with edamame, artichokes (real ones) and balsamic vinegar; sea bass ceviche with melon, alfalfa sprouts, pumpkin seeds and radish sauce; salmon in papillote with lime, ginger, cilantro and asparagus and raisin couscous; homemade potato gnocchi with sauteed fennel, crispy sage and shaved Idiazabal cheese; and the excellent roasted tomato and mozzarella salad with green olive romesco sauce. The dish in the photo, a creamy and flavorful foie mi-cuit, was accompanied by pumpkin jam preserves, nut bread and ground pistachios. Best of all, most of these carefully thought-out and equally as carefully prepared dishes are priced between 8 and 12 euros apiece - almost unheard of in the city these days. Both times I ate here I walked away paying just under 20 Euros, including wine.

My only complaint the restaurant's insistence in calling the whole thing "Fusion food" - oh for the love of anything sacred, when will that expression just die already?!!!  Your food is better than that, In Situ!

I digress. There is also a brunch menu on Sundays, which I have yet to taste although it looks promising (I am so tired of Madrid restaurants saying that they have brunch when often it is nothing of the kind, and then charging a fortune and serving industrially made muffins), because it opens earlier than most (at 11:30 - don't laugh, Americans), and the food is a la carte, with dishes like pancakes and delicious sounding scrambled eggs for around 4 or 5 Euros.

It's nice to finally have a neighborhood go-to again!

Email ThisBlogThis!Share to TwitterShare to FacebookShare to Pinterest
topic Best of Madrid Dining, Food, In Situ, Madrid, My breakfast, My dinner, my lunch, Restaurants, Spain

Rocambolsec - Ice cream for the last days of summer!

Oh yes, I have been lazy.

I did work through plenty of my summer holidays, but if I didn't necessarily look lazy, then I definitely felt it. But what is summer for if not for banishing feelings of guilt and indulging in a little hedonism?

At least that's what I told myself as i prepared to eat this monster of an ice cream cone from haute-gelatería Rocambolesc, the new ice cream parlor recently opened in the Spanish city of Girona by the three-Michelin star, second-best restaurant in the world, El Celler de Can Roca.

This cutesy, retro and somewhat whimsical shop offers six flavors of soft-serve style, natural ice cream that is made in the world renowned restaurant and transported to the shop by bicycle. As indecisive as ever, I tasted the sheep's milk cheese flavor (delicious, like a fresh yoghurt), baked apple (uncanny how it exactly recalled the flavor of the fruit), and the rich Tahitian vanilla. The other three flavors were chocolate, apricot and cherries. Decisions, decisions!

The best part of all was in trying to choose three toppings from the massive selection of homemade sauces, cookies, brownies, chocolates, candies and, everybody's favorite, freshly whipped-up cotton candy!


More info about this fun and tasty shop can be found here at The "Sweetest" Roca Unveils Rocambolesc, on Foods From Spain.
7 comments