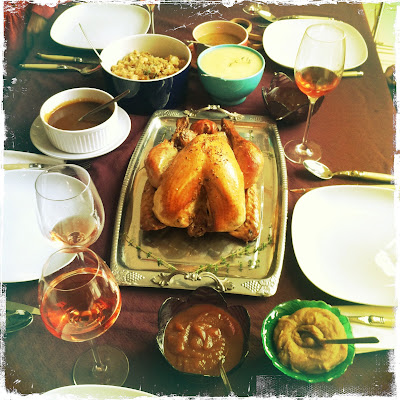 I was greeted with an agreeable surprise the other day when a messenger showed up at my door with the new Thanksgiving Day Turkey made by Spanish company Cascajares - experts in the field of gourmet pre-prepared fare like roasted suckling pig and stuffed capons. Their latest adventure, in collaboration with USA-based Spanish chef José Andrés, is a Thanksgiving turkey, pre-cooked and ready to pop in the oven for half an hour, and accompanied with all the fixings (stuffing, chestnut puree, cranberry sauce, apple sauce, gravy and mashed potatoes). Still a work in progress with only 1,000 turkeys being sold this year, I was super excited when the company offered to send me one to get an authentic American point of view on the product. Anxious to do my part, I dutifully invited some true blue americanas around this weekend to size up this new design. While I am still in the midst of constructing my full report, I thought I could get a jump on the whole thing with a few photos and first impressions. 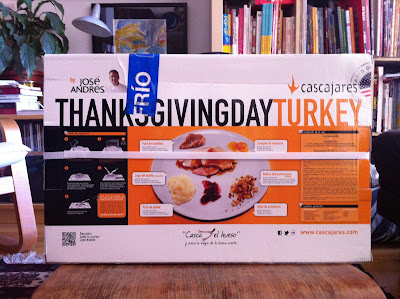 While the box is enormous, everyone's first thought was that the photo of the plate doesn't do justice to the typical American portion sizes on Thanksgiving - a day when it's all about heaping it on. We were dubious as to the 8-10 portion serving size indicated on the box and worried we might not have enough. I made another tray of stuffing just in case. In the end, while the sides might not be sufficient for 8 people, the turkey had more than enough delicious meat, and three days later I am still enjoying the last of it (there were 5 of us at lunch). 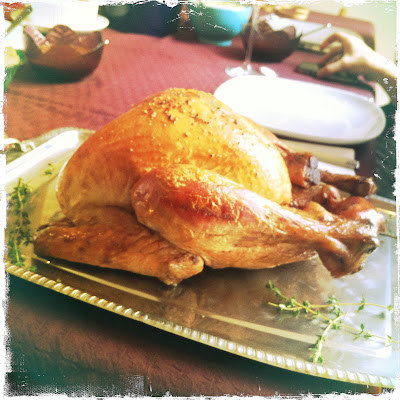 The turkey and the gravy were the best part and truly tasted just as they should. I really have no complaints other than the fact that the meat might have been slightly dry (which happens to my turkeys as well from time to time), and maybe we would have benefited from more specific cooking instructions (30-45 minutes at no specified temperature). The bird comes with some gravy in the cooking package and I confess that I did rub the whole thing in butter and pepper before chucking it in the oven...once an American. It really was good and has now turned into an absolutely wonderful and flavorful turkey stock.

The most disappointing aspects were undoubtedly the sides, which lacked a bit of oomph and texture in terms of presentation and quantity. The gravy was delicious, especially when I mixed it with the juices that came off the bird in the oven. The cranberry sauce was good flavor-wise, but was completely pureed and needed some whole berries (and maybe gelatin) to give it some texture. The apple compote was fine and the chestnut puree correct though really sweet, but neither one seem necessary to me and don't add much in terms of presentation or texture either as they are both similarly toned brown purees. The stuffing was flavorful, but with basically only onions, celery and bread, it was kind of boring and lacked color and herbs. I have never had a stuffing without sage, or at the very LEAST thyme. And my least favorite were the mashed potatoes which were very runny and also needed more structure and texture. In any case, they are on the right track and hopefully will continue to tweak the products during the year to come. The product is intended for an American audience (the company has a newly minted factory in Canada), but also for people all over the world.

On a side note, Cascajares held a press conference in the American Embassy last Friday with José Andrés and the American Ambassador Alan Solomont and his wife Susan. It was lots of fun to watch them explain to the Spanish press about the meaning of Thanksgiving (my hands-down favorite holiday) and the significance of the turkey and the meal. Then they dove into a turkey lunch with about a million reporters snapping photos around them.

Despite any misgivings I have about trying to replicate this home cooked favorite, I truly admire the company for what they are trying to do and think that they are well on their way to achieving it. Oh, and for 120 Euros a box, it's not a bad deal at all - especially if you can't cook and it saves doing the shopping and cleaning.

I wish it could have been a Designation of Origin Valdeorras tasting in Valdeorras itself (a lush area in the northeastern corner of the province of Ourense in Galicia), but I'll settle for trying these crisp, mineral whites made with Godello grapes and fruit-forward Mencía reds in Madrid. We all have a cross to bear.

My favorite Godello wines are the ones that are super crisp and deeply mineral, reflecting the slate soils, and casting a more metallic than earthy mineral quality. They also tend to give of stone fruit aromas and at times can be almost spicy, thanks to the common practice of briefly aging them with their lees. This can temper the acidity of the wines and impart them with complex aromas.

Although I did not, by a long shot, try all of the wines that were on-hand last night, and nor were all of the wineries represented, here are just a few of my favorites in varying price ranges:

Coroa
Adega A Coroa
Crisp, clean, very mineral and highly aromatic without any touch of cloying fruit. I could drink this by the bucketful (10-12 Euros).

Erebo
Bodega Carballal
Slightly spiced on the nose, lots of fruit but with an acid/bitter ending on the palate that gives it a crisp ending. Unctuous texture and metallic minerality (6 Euros).

Pezas de Portela
Bodega Valdesil
This well known winery makes several different Godello wines, all of which are very good and great value. This is one of the more expensive ones (20-25 Euros) and yes, it is very delicious.

As far as the Mencías were concerned, alas, I didn't get very far as I kept getting sucked back into whites. But I did quite enjoy the very earthy, fruity and complex Pagos del Galir by Bodega Virxen de Galir.

Bar Amor: the Spanish bistro at its best


Bar Amor must have been wondering, "where did all the love go?", and I hope it hasn't kept them up at night.

Every time I go to dinner at this wonderful neighborhood bistro, tucked snugly on a corner in Madrid's epic Malasaña neighborhood, kitty corner from my old apartment - which incidentally was next door to a bar called Diplodocus that served a drink called Brontosaurus Milk -, I fall in love all over again and invariably spend the whole night raving rapturously to anyone who will listen about anything and everything. Then I take a bunch of photos, promise to write about it and then drink too much delicious wine and forget.

Let me rectify this immediately. I love this restaurant. The owners are charming and their place is a wonderfully restored old local that has maintained its original granite block walls and bricks, to which they then added beautiful dark wood and a new, retro tile floor. There is a tiny bar where just a few people can squeeze together and sit in the shade of the giant chalkboard that is covering one wall, and only space for around 20 diners. With its large windows open onto the street in the summer and the cozy warmth and gentle lighting in the winter, it's hard to decide which season is the best at Bar Amor - oh yes, that's right, all of them.

The menu is as equally well thought out and tasteful (or maybe tasty) as the decor, with a good balance between traditional Spanish favorites like croquetas, huevos rotos and salmorejo (all extremely well executed with contemporary touches),

and more innovative ideas like the mango ravioli stuffed with foie gras and served with a PX reduction, or last night's special of a Wakame seaweed salad with radishes.

Then of course there are other dishes that defy pigeonholing and are just well-cooked, honest and delicious. I really love the simple, delectable secreto Ibérico (pork belly) that is perfectly grilled and served with a sort of prune chutney and (on this occasion) sweet potato chips. 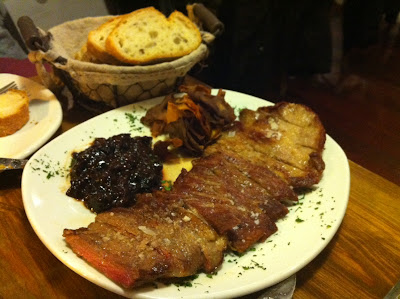 Whichever way your fancy floats, I don't think you'll be disappointed with this charming neighborhood restaurant. But should more convincing be needed, I will also mention the frequent use of excellent Spanish foodstuffs, such as anchovies from Cantabria, peppers from Lodosa, Cecina de Leon, etc. as well as the changing selection of locally made microbrews and a fantastically varied and well-priced wine list that contains a special selection of Madrid wines - my favorite of which is almost always the Tagonius Crianza.

Prices range from about 20-30 Euros a person for dinner with wine, dessert and lots of good food. It's tiny, so reservations recommended.

There is something about Castile-Leon that makes my heart pound. Though a cultural and neurological center of Spain for centuries, boasting some of the country's finest universities, palaces, museums, restaurants and cathedrals, I'm drawn to this vast area for its great unknown and the sense of wildness that I feel when I'm here.
I want to get to know its darkest forests and rugged, changing landscapes; the long expanses of green that are interrupted by neither town nor fence - with the exception of a crumbled down wall or stone farmhouse here and there - the idea that you can drive for hours and still discover corners, valleys and rivers that you've never seen before.
And mostly, I want to eat, everything I can - from the more classical slow roasted meats and cured hams and sausages, to gamier meats like boar, venison and partridge; and not forgetting the area's wonderful cheeses, produce and legumes. But what I want most of all are its wild mushrooms - those secrets from the forest that can only be found in the autumn and that for me can't be replicated anywhere else but in this magical place.

Fortunately, I'm a lucky soul. Lucky enough to have just gotten back from the third edition of "Soria Gastronómica", the International Mycology Conference that's held in the Castilian city of Soria every two years. This congress, dedicated to all things relating to gastronomic applications for wild mushrooms, is a feast for the senses and a challenge to the waistline. This year's edition, which was held on October 29-30th, hosted presentations by over 20 chefs - mainly from Castile-Leon, but also representing Madrid, Cantabria and a few far flung countries like Sweden, India and Canada - was no different, featuring cooking demonstrations, round-table discussions, tasting opportunities, and hunger-inducing talks on topics such as: The Sweet World of Wild Mushrooms (Elena Lucas Gonzalo, Restaurante la Lobita in Navaleo, Soria), Sensations: Mycology in its Habitat (Pedro Mario and Óscar Pérez, Restaurante El Ermitaño in Benevente, Zamora), Gastromycology in Bierzo (Lydia Álvarz Marqués, Parador de Turismo in Villafranca de Bierzo, Leon), and Avant-garde Techniques Applied to Wild Mushrooms (Óscar García Marina of Baluarte in Soria), to name just a few.

And while I am slowly picking away at my full report on this fascinating conference for Foods From Spain, I will leave you with just a few photos of some of the nibbles I was able to try as part of this amazing trip. Most are from Soria's Restaurante Trashumante or the Convento Espacio Grumer in nearby Almazán. More to come.