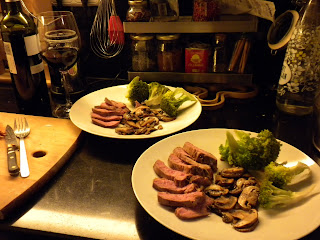 I bought a beautiful magret de pato (duck magret) last night for dinner. E loves it and has been working so hard that he needed a gastronomic pick-me-up, and I like it because it gives me a valid excuse (not that I REALLY need one) to open a bottle of wine on a Sunday night. It was also on sale, and for a mere 5-6 Euros a smallish magret, about the size of a large potato, is plenty for two or three. I feel like people turn to duck as a special-occasion, restaurant type food that is really too much trouble to cook at home, when actually it really couldn’t be any easier, and can be accompanied by whatever you have on hand. I used to spend large amounts of time following this delicious, but ingredient heavy, recipe for Duck with Blackberry Sauce, except that I used raspberries and used every clean item in the kitchen to pull it off. Yesterday I just decided to wing it. There are about a million different ways to cook the duck and I usually end up doing a combination of several (sear on stove, roast in oven, etc.), but the easiest way really seems to be the following, and my duck turned out juicy and delicious.

Prepare the duck by trimming any excess fat (I use scissors) that is hanging loose off the sides. Then, cut a crosshatch pattern in the fat about half an inch apart, being careful not to cut into the meat underneath. If you do cut the meat accidentally, as I did, patch it up with some of the fat that you have trimmed off the sides. I don´t know if this helps, but it made me feel like I was a culinary genius.
Salt and pepper the whole thing and heat a pan on medium for about a minute or two and then chuck the duck on fat side down and cook on medium low for about 10-12 minutes. The fat will render (seep out into the pan) and slowly get brown and crispy, when it is nice and brown, flip it over and cook on the meat side for 3-4 minutes, depending on the thickness and how rare it is.
Take it off the heat and let it sit for a few minutes while you pour the delicious fat into a jar to use later to make homemade popcorn.
Slice the duck and serve with whatever you like. I had portabella mushrooms on hand which I sauteed with garlic and some of the fat. Duck is always good with something slightly sweet, and so I dumped a spoonful of Amaretto in the mixture and plenty of salt and pepper. Brandy, sherry, or even maple syrup would have been good too. Then I steamed some broccoli on the side so that I could feel virtuous and healthy.

Now that I'm joining the blogging community, I have to say that I love the look of yours!!! Very clean!!

Sounds delicious - big up the duck!!!