Migas by Adolfo, King of Toledo

Last week I had the honor of visiting Adolfo Muñoz at his Adolfo Restaurante in Toledo.

(First of all, I would like to remind everyone, including myself that Toledo is right around the corner from Madrid. It takes only thirty minutes to get there, which is frankly, almost too fast, as I do so enjoy a good journey by train.)

Snugly situated in the middle of the city, just barely around the corner from the cathedral, this iconic restaurant has long been an institution in this city, which in turn has lead to more recent offshoots like the modern tapas bar Adolfo Colección, the elegant Viñedos Cigarral Santa María banquet hall and winery that is perched over the city with breathtaking views, and the new restaurant on the top floor of Madrid's restored Palacio de Cibeles (old Post Office), which is run by Adolfo's son Javier.
But it is at Adolfo Restaurante where you are most likely to find this gregarious chef stuck into the busy goings-on in the massive, open kitchen, and it is in this building that you can truly feel the essence of this historic city and the treasures that it hides.

I first visited this restaurant many year's ago with an Irish friend's delightful grandfather. I remember it as being very classic, both in style and in cuisine, with a lot of old world charm. After a hefty renovation in recent years, the place has a new look that includes the open-kitchen, a rooftop terrace with stunning views of the city, nine hotel rooms, and a menu that features a more seasonal take on traditional cuisine and regional flavors. Though somewhat sleeker than I remembered, the place still has old world charm, particularly thanks to the fact that it occupies a 14th century noble house and has the original, exquisitely restored, painted wood ceilings and columns to prove it.

The rest of this charm comes from Adolfo himself, who maintains a level of enthusiasm and energy that is absolutely contagious - especially as he hops around his kitchen.

The official objective of my trip was was two-fold. On the one hand, I had to shadow Jeffrey Weiss, a young American chef who had once worked in Adolfo's kitchens as part of the ICEX (Spanish Institute for Foreign Trade) Training Program and who was back in Spain with photographer Nathan Rawlinson to take photographs for his upcoming book on Spanish cured meats. On the other, I wanted to learn how to make perdíz en escabeche (partridge marinated in vinegar), a typical dish from this region for which Adolfo is particularly well-known and about which I happened to be writing an article for Foods From Spain.
The unofficial purpose was obvious, I mean who would pass up the chance to jump into the kitchen with a famous chef and learn how to make his special dish?

What I wasn't prepared for was the big surprise bonus, which was that Adolfo had also decided to teach us how to make another of the most famous dish's from Castilla-La Mancha: Migas.

Migas (which means crumbs) is one of those "peasant food" dishes that was surely created as a means to use up old bread and other humble ingredients in a dish that would stick to your ribs. I have always loved these kinds of simple dishes that can often be thrown together from whatever you happen to have on hand - often arriving at hearty and savory flavors. Migas is somewhat like a bread stuffing, but the small crumb-like pieces of bread are moistened by olive oil and must remain loose (not stuck together). Anyway, here is how it's done a la Adolfo:

Lots of garlic, a few slices of chorizo, some slices of nice lean pork, a red pepper (used as garnish), finely chopped candeal bread crumbs (preferably that someone else has diced), olive oil and sweet Spanish pimentón (paprika). Cut the chorizo into small pieces, smash the garlic with the peel on, cube the pork and slice the pepper to fry separately.
Prior to preparing this dish, the migas (crumbs) should have been mixed with sweet paprika and a little bit of mineral water, covered with a damp cloth and left in the refrigerator for around 12 hours. 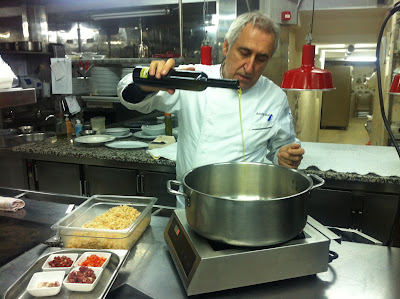 Add a little bit of extra virgin olive oil to your beautiful big pot - preferably if you have your own brand of oil as Adolfo does. 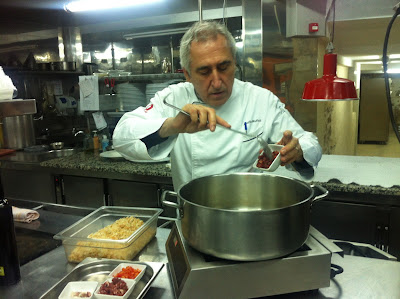 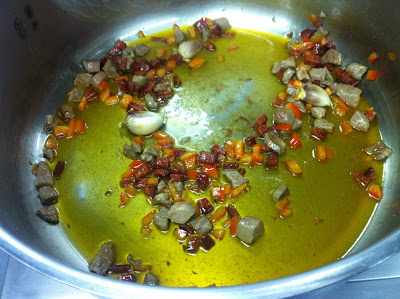 Finally, turn the heat back on and add the bread crumbs. 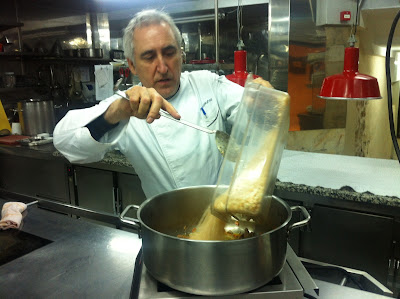 Stir the mixture together quickly until the oil turns all the crumbs a lovely golden brown (just a minute or two). They should still be loose and not clumped together. 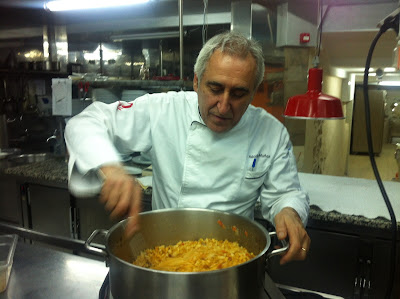 Garnish with the red pepper and a fried egg in the center (and a pinch of salt). 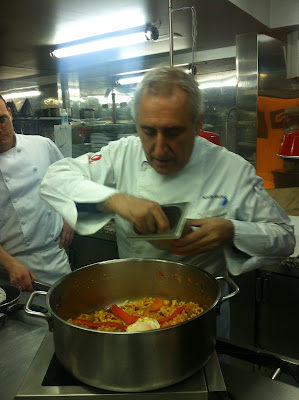 Enjoy! I certainly did! 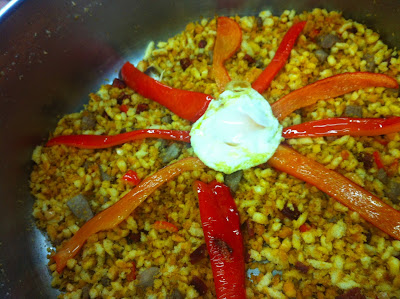 I love migas! I also remember how generous Adolfo was when I was collecting recipes for a La Mancha cookbook.

I know, he is one of a kind. And so much energy!! thanks for your comment!

Thank you for your visit, it's a lovely blog. Thans so much.


What's up, I check your blog like every week. Your story-telling style is witty, keep up the good work! capital one login


You can definitely see your enthusiasm in the article you write. The arena hopes for even more passionate writers like you who are not afraid to say how they believe. All the time follow your heart. outlook login

I wanted to thank you for this great read!! I definitely enjoying every little bit of it I have you bookmarked to check out new stuff you post. toledo spain

This is such a great resource that you are providing and you give it away for free. I love seeing blog that understand the value of providing a quality resource for free. Jiuzhaigou Tour

Hey there! Nice stuff, please keep me posted when you post something like this! travel news and tips