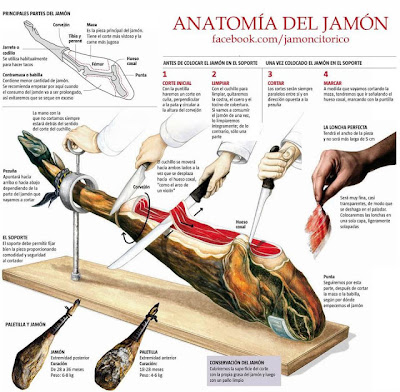 I love this Spanish jamón slicing guide that I got from the blog of my friend Santiago Orts, botanist extraordinaire and co-founder of the amazing company Huerto Gourmet.

Though Santiago is known for the incredible and often rare heirloom fruits and vegetables that are found in his orchards in Elche (Alicante), he recently made a foray into the world of Spain’s most delectable treat: JAMÓN (nectar of the gods).

At recent gastronomic event Madrid Fusión, Santiago got together with noted Guijuelo (Salamanca) Ibérico ham maker Atanasio Carrasco of Carrasco to present their fascinating new collaboration, the product of three years of experimentation and “research”, which I am sure often came down to getting together and eating a lot of ham. Poor souls.

Basically, the new project consisted of raising Iberian pigs on the fresh dates that Santiago’s orchards are so famous for, instead of the usual bellota (acorns).

I got to taste the results first hand at Madrid Fusión, biting into the sweet and somewhat creamier textures of first salchichón and then ham made from these pigs.

Though the two confessed that there are no immediate plans to retail these products, and also that it costs ten times more for the pigs to eat fresh dates than the coveted acorns, I still find the idea fascinating and more than worthy of an enthusiastic “hot diggity”.

With regards to the ham-slicing chart, it is worth a study. In fact, few people realize just how difficult a task it is to slice a ham, and particularly to slice it well.
At home, we usually have to watch the same YouTube instructional guide several times before attacking the Christmas jamón, and then after slicing for a few days (very painstaking and tiring work – particularly when you are salivating heavily), we give in and take it to our local market where they slice what is left and put it in vacuum-sealed bags for us. I should point out that I say "we", but I really mean E.
What???  It’s called division of labor!

Great post Adrienne. I love the chart! I might track one down for my father-in-law who cautiously watches over me as I try cutting the xmas jamon, before gently taking the knife away from me...

This means have the ability to|you presumably can} experience the enjoyable and pleasure with out spending any of your own money. The House Edge is 1xbet a term used to explain the mathematical benefit that the casino has over you as you play over time. The home edge tells you ways much each game pays out on common over its lifespan and which video games offer players the most effective returns on their bets. This benefit is the product of the video games themselves and never set by individual casinos. So no matter what matter what} or where you select to play, if you're betting on casino video games, have the ability to|you presumably can}'t escape the house edge.