Puckering up to Spanish grapefruit 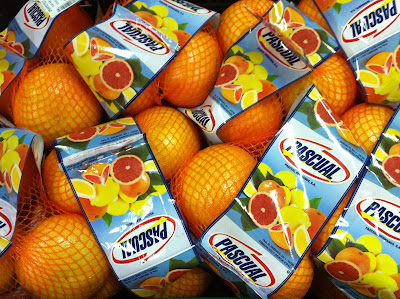 One of my favorite winter treats has always been grapefruit. Maybe it has something to do with the fact that my father's from Florida, but as children we used to eat half a grapefruit on winter mornings slathered in our own honey. I love the fact that the fruit makes its own handy breakfast bowl and the utilitarian beauty of the serrated grapefruit spoon.
When the magazine asked me to do an article on Spain's growing grapefruit, or pomelo, industry, I was completely shocked. I had never seen people eating grapefruit here the way that they do in the States (or at all really) and had no idea that it was such an important crop. Of course it's not surprising given the importance of other citrus crops such as oranges and lemos along the Spanish Mediterranean coast.
A four-hour train trip down to the beguiling and tropical town of Murcia, with it's ridiculously good vegetables and tapas scene, revealed the extent to which this delicious and tart fruit is blushing its way across the countryside.