The Belly of the Bluefin 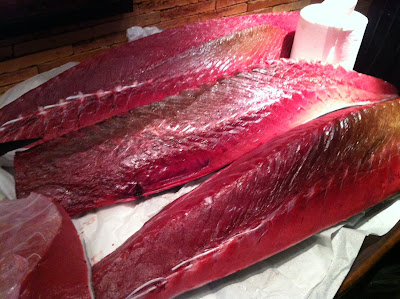 It's been awhile since I've been to so many events in one day, but I confess, it was a lot of fun.

The most amazing one of all, however, was the event that was least expected, that I wasn't actually invited to, and that finished off the day with a bang. 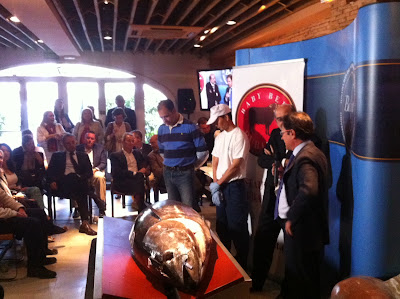 It was the breaking down of an entire 200+ kilo bluefin tuna sponsored by Madrid's Baby Beef Rubaiyat Restaurant and Grupo Balfegó. Unreal.

The entire process took well over an hour (or 2) and seemed to be as dependent on strength and experience as it was on intuition and pure skill. It was both fascinating and shocking in terms of the amount of meat produced by that one single tuna. 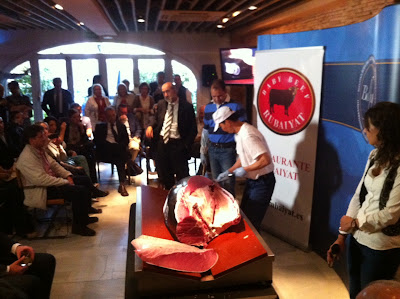 On a weird note, seeing that beautiful beast of a 15 year old tuna laid out like a sacrificial lamb on the table reminded me painfully of that scene in The Lion the Witch and the Wardrobe (the book) where Aslan gives is life to save Edmund and is strapped to the table and killed by the witch. That scene horrified me as a child and horrifies me still.

And then I ate a ton of sashimi.

Email ThisBlogThis!Share to TwitterShare to FacebookShare to Pinterest
topic Madrid, My dinner, tuna