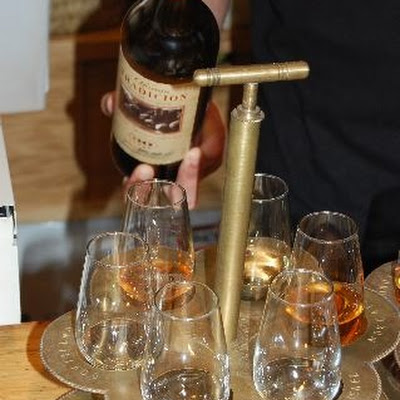 The Sherry Corner at the Mercado de San Miguel offers a tasting menu of six glasses of sherry and a pairing of six different Spanish tapas. I thought a nice way to try this tour would be to send two middle-aged American ladies to experience Spanish culture first hand and report back on the results. The following is their report, as written by my mother, Susan.

The tasting began with a Fino sherry and progressed through Palo Cortado, Amontillado, Oloroso, Moscatel and finally the very sweet, dark Pedro Ximenez. Glasses of sherry were poured and arranged in a brass holder which could be carried around the market fairly easily-although with six glasses of sherry it was easier to find a table in the center of the market and use that as a base of operation. With two people at the tasting, one could guard the sherry and the other dart forth in search of the tasty tapa samples that complimented the various sherrys. Tapas included bacalao, cheese, olives, nuts and sushi. An audio-guide was available (in eight different languages) which clearly explained history and process of sherry making and the importance of sherry in the Spanish culture. This audio-guide was easy to understand, but we recommend visiting the market at an off-time as when the market is packed, it’s a bit hard to hear. Carrying the wine tray and the headset and controller did make us look a bit unusual in the market. The brass tray itself was the start of several conversations with other patrons of the market-what was it and where did one get it? As the sherrys were consumed our Spanish improved immensely and we were able to answer many of the questions we were asked about the tasting and direct people to The Sherry Corner. The small table we shared was with a group of Belgian tourists who were greatly interested in our progressive tastings. As we were leaving, we invited them to a glass of the Pedro Ximenez from The Sherry Corner, and left these tourists happily trying a new aspect of Spanish culture. For more information and a discount coupon: www.sherry-corner.com. Photo complements of The Sherry Corner.