I just spent a long weekend in Cádiz, a charming city in the south of Spain, founded by Hercules incidentally and thought to be the oldest in Europe. It is one of my favorite places in Andalucía and in Spain in general. Nice people, wonderful ruins and charming plazas, great food, lots of fried fish, sherry and beautiful beaches. I took about a million photos of the food which will be popping up in posts little by little. I thought it best to start chronologically, however, with breakfast. 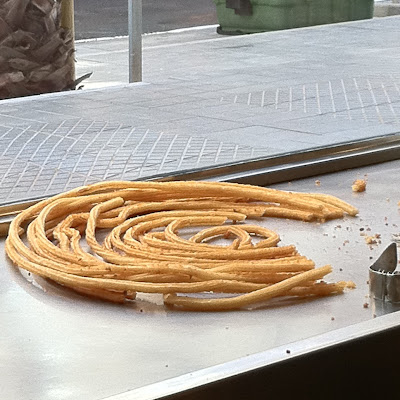 We had heard that the churros in Cadíz were thinner than in other places in Spain, and since E is a venerated Madrid-born expert on all things churros, I ventured up the street from the hotel with directions from a couple of complementary elderly gentlemen to the famous Cadíz freidura (fry-shop), Las Flores. Connected to a cafeteria-style restaurant, in the morning this fry counter is all about churros, while in the early afternoon it is where people from all over the city come to pick up an assortment of the delicious and typically fried fish and mollusks that has made this establishment famous. It is fried fish to-go in its most wonderful form.

The churros here were indeed thin, and made in crisp, golden loops of fried dough, which are then cut into strips. They are ordered by weight and so, unsure of how much we needed for two people, the helpful churrero suggested I get a cuarto, which I took to mean a quarter kilo. The whole order cost 1.80 Euros. Needless to say I couldn't believe that there were plenty of individuals at the bar ordering medio for themselves. Despite the fact that they were probably the best I had ever tried, we could only get through about half of the cuarto of incredible crisp and toasted treats. My recommendation is that they are best eaten dunked in coffee and then dipped in a bit of sugar while looking at the Atlantic Ocean.