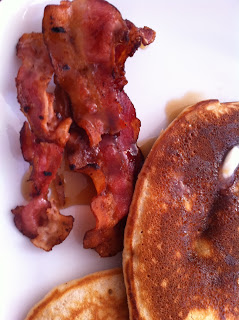 When you own a restaurant and do all the cooking, you get to the point where you would rather eat just about anything but the food that you yourself prepare there on a daily basis. Instead of making myself one of the healthy salads or other dishes on the menu, I would think of everything in terms of "ugh! If I eat that, I will just have to make more of it later".  The only days that I truly stuffed myself while working were Sundays, when we brought the miracle of Sunday brunch to the center of Madrid...and with it, the forbidden pleasure: smoky bacon dipped in maple syrup. This treat was stuffed into our mouths at a feverish rate while passing through the kitchen - and often washed down with a Bloody Mary. My business partner B was the first to give it this name, a term that we later introduced to many a regular client, "So, Juan, have I told you about the Forbidden Pleasure?".
Well, it seems that many years later this treat (or a slight variation of it) has finally made it to the realm of Spanish "Avant-garde" tapas, as illustrated in this article/recipe that came out yesterday in Gastronomía y Cia. They don't seem to know that it's forbidden, however...

Email ThisBlogThis!Share to TwitterShare to FacebookShare to Pinterest
topic Food, My breakfast, Recipes