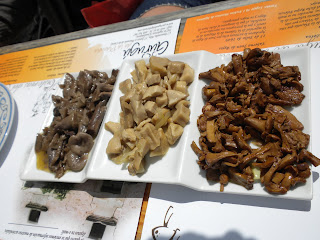 I just spent a weekend in Sigüenza, a charming medeival town in northern Castilla La Mancha surrounded by incredible countryside and beautiful trails, not that the town´s tourist office has ever heard of them. There is also an incredibly restored castle that has been turned into a four star Parador, a national, publicly owned chain of hotels located in restored monasteries and other historic monuments. Unfortunately, the hotel staff at Sigüenza´s Parador had the personality of monuments - just as stiff and just as cold.
Fortunately, there were other more agreeable and delicious places to dine in Sigüenza, including Gurugú de la Plazuela, a lovely, family-owned restaurant that occupies a beautiful stone building on a corner overlooking a plaza, with the green hills of La Mancha just beyond. A specialty here are the wild mushrooms, of which there is an ample selection of around ten differnet varieties, each prepared in a way that best suits their individual characteristics, but mostly just sauteed with a little olive oil and garlic or onion. If you are less than fungally savvy, there is an option of trying three different kinds of mushrooms, selected by the friendly waiter´s aunt and uncle depending on the season. Another specialty is the rabo de toro, bull´s tail that is slowly cooked into a tender stew with red wine, carrots, onions, garlic and cloves, among other things. Unfortunately, I kept forgetting to take photos of my food before eating, all I ended up with was a photo of a plate with a pile of bones, a poor example of the deliciousness that was the dish.

Gotta love that Rabo de toro "mainnnnnnnnnnn"... it´s too bad you were overwhelmed by it and forgot to take a picture.